The aim of the roundtable was to present and discuss the findings of the regional research project “Accelerating the Progress on Effective Tobacco Tax Policies in Low- and Middle-Income Countries”. The issues discussed among others included the existing situation of tobacco consumption, normative regulation, and possible effects of the tobacco fiscal policies changes.

Mr. Faik Hoti, the Coordinator of the Inter-ministerial Council for Tobacco Control, briefed the participants on the current state of implementation of the Law on Tobacco Control, emphasizing that it should be further strengthened. Mr. Hoti highlighted that the “Kosovan Plan for Tobacco Control” is currently being drafted and waiting for further proceedings.

Ms. Nitë Bylykbashi-Deliu from CPC presented the aim, methodology, analysis conducted and products of the research project. She also emphasized the challenges of the implementation of the project among them the lack of the data on tobacco in Kosovo and its reliability.

Ms. Lirije Palushi from CPC presented the research findings and recommendations. During her presentation, one of the key findings of the project regarding the impact of tax and price increase in consumption and budget revenues was highlighted and very well received from the stakeholders present. According to the economic analysis conducted, a 10% increase in the cigarette retail price – from an increased excise tax – shall be followed by a 6.8% decrease in consumption in the long run and 3.3% in the short run, meanwhile increasing excise revenues between 6.14%- 6.73%.

The roundtable was closed by a debate on the importance and role of each stakeholder and the cooperation among needed, aiming at reducing the tobacco consumption in Kosovo. 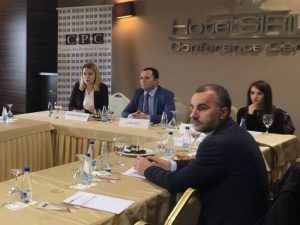