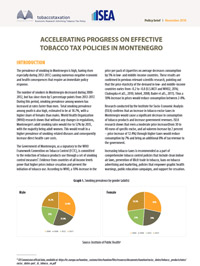 The prevalence of smoking in Montenegro is high, having risen especially during 2012-2017, causing numerous negative economic and health consequences that require an immediate policy response. The number of smokers in Montenegro decreased during 2000- 2012, but has since risen by 5 percentage points from 2012-2017. During this period, smoking prevalence among women has increased at rates faster than men. Total smoking prevalence among youth is also high, estimated to be at 18.7%, with a higher share of females than males. World Health Organization (WHO) research shows that without any changes in regulations, Montenegro’s adult smoking rates would rise to 52% by 2035, with the majority being adult women. This would result in a higher prevalence of smoking-related diseases and consequently increase direct health-care costs.