National Study on Economic of Tobacco and Tobacco Taxation – Kosovo* (2018)

National Study on Economic of Tobacco and Tobacco Taxation – Kosovo 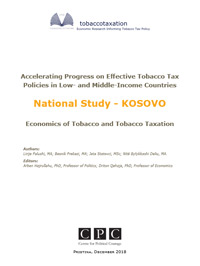 Kosovo had a rather large tobacco industry from the 1960s until the early 1990s, when it had a major impact on its economy. The tobacco factory “Industria e Duhanit Gjilan– IDGJ” was one of the largest in the former Yugoslavia. Its economic impact was mainly felt in the Anamorava region, particularly in the city of Gjilan, where the tobacco industry had 800 employees, created 50,000 seasonal jobs and engaged over 10,000 farmers.

However, the tobacco industry in Kosovo was short-lived. From the late 1990s and beginning of 2000, Kosovo ceased manufacturing any of tobacco products. This meant that all tobacco products in Kosovo have since been imported, and local farming is minimal or irrelevant for the national tobacco market.

Kosovo is considered to be a country with a high smoking prevalence, even though the Kosovo Agency of Statistics (KAS) estimates that it is only at the level of 16% of population above 16 years old. Alternative estimates from other studies show that smoking prevalence is as high as 28% (see page 15). A more realistic view may come from Kosovo Customs data on the volume (up 4.5 tons in kg of tobacco products per year) and value (up to €60 million per year) of the imported tobacco products.

*References to Kosovo shall be understood to be in the context of Security Council Resolution 1244 (1999).