National Study on Economic of Tobacco and Tobacco Taxation – Montenegro (2018)

National Study on Economic of Tobacco and Tobacco Taxation – Montenegro 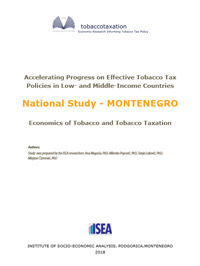 Montenegro is a small, Central Mediterranean country in Southeast Europe, on the Balkan Peninsula, with a coastline at the Adriatic Sea. It covers an area of 13,812 km2, with 295 km long coast and 72 km of beaches. The population counts 620,029 people (Survey of 2011). The largest city and capital of Montenegro is Podgorica, home to approximately 185,937 people or 1/3 of country’s entire population.

The reduction has occurred mainly due to the dominance of new cigarette brands that are based on a mixture of diﬀerent sorts of tobacco and the 2016 liquidation of Montenegro’s main domestic producer Duvanski kombinat Podgorica (DKP) after 113 years of existence. Additionally, because of the market size, it was unproftable for foreign investors to enter the market. Consequently, the number of households that grow raw tobacco, as well as the number of employees in the tobacco manufacturing sector, has dropped signifcantly.