National Study on Economic of Tobacco and Tobacco Taxation (2018)

National Study on Economic of Tobacco and Tobacco Taxation – Serbia 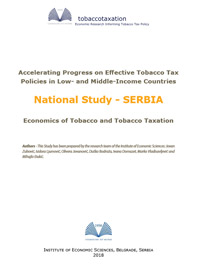 Serbia is located in the Southeastern Europe region, classifed as an upper-middle-income country according to the World Bank ranking.

The country covers a total of 88,361 km2 with a total population of 7,020,858 inhabitants and has one of the oldest populations in the world (average age of 42.9 years, mortality rate continually exceeding the birth rate). The tobacco market and industry in Serbia are highly regulated.