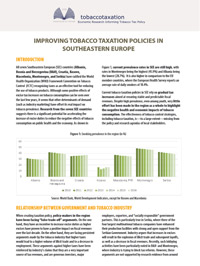 All seven Southeastern European (SEE) countries (Albania, Bosnia and Herzegovina (B&H), Croatia, Kosovo, Macedonia, Montenegro, and Serbia) have ratified the World Health Organization (WHO) Framework Convention on Tobacco Control (FCTC) recognizing taxes as an effective tool for reducing the use of tobacco products. Although some positive effects of excise tax increases on tobacco consumption can be seen over the last few years, it seems that other determinants of demand (such as industry marketing) have offset its real impact on tobacco prevalence.

Research from the seven SEE countries suggests there is a significant potential for accelerating the increase of excise duties to reduce the negative effects of tobacco consumption on public health and the economy.

Current prevalence rates in SEE are still high, with rates in Montenegro being the highest (45.9%) and Albania being the lowest (28.7%). It is also higher in comparison to the EU member countries, where the European Health Survey reports an average rate of daily smokers of 18.4%. Current tobacco taxation policies in SEE rely on gradual tax increases aimed at ensuring stable and predictable fiscal revenues.

Despite high prevalence, even among youth, very little effort has been made in the region as a whole to highlight the negative health and economic impacts of tobacco consumption. The effectiveness of tobacco control strategies, including tobacco taxation, is—to a large extent—missing from the policy and research agendas of local stakeholders.