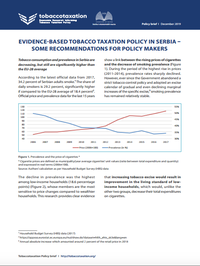 Tobacco consumption and prevalence in Serbia are decreasing, but still are significantly higher than the EU-28 average

According to the latest official data from 2017, 34.2 percent of Serbian adults smoke. The share of daily smokers is 29.2 percent, significantly higher if compared to the EU-28 average of 18.4 percent. Official price and prevalence data for the last 15 years show a link between the rising prices of cigarettes and the decrease of smoking prevalence (Figure 1). During the period of the highest rise in prices (2011-2014), prevalence rates sharply declined. However, ever since the Government abandoned a strict tobacco control policy and adopted an excise calendar of gradual and even declining marginal increases of the specific excise, smoking prevalence has remained relatively stable.