On Thursday, November 18, 2021, Institute of Economic Sciences organised a roundtable entitled "Affordability of tobacco products and the effects of cigarette consumption on the structure of household consumption in Serbia and the region." Organisation of the event was the opportunity for the IES team to present results of the research conducted in 2021 to a wider audience and discuss policy recommendations which could improve effectiveness of the existing tobacco control policies in Serbia.

Trend of declining cigarette consumption that has been present for the almost two decades is slightly changing over the last 2-3 years. IES estimates show that, after a long time, in 2021 consumption of tobacco products will increase resulting with related negative consequences on Serbian society. One of the main reasons refers to the stable and even rising affordability of cigarettes, which encourages their consumption. Adverse effects are manifested in at least 15 thousand premature deaths annually, rising health costs, decline in productivity, as well as in reduced quality of consumption (so called secondary poverty) since smokers' households spend less on education and food and more on alcohol and other unproductive purposes.

Research shows that the purchase of 2,000 cigarettes in Serbia requires 3.7% of GDP per capita, which is comparable to Romania and Montenegro, but significantly less than in BiH. Results indicate the necessity for reform of the taxation policy with an aim to reduce the affordability. Smoking households in Serbia, on average, spend slightly more than 9% of their budget on tobacco products, which mostly translates into lower expenditures on food and non-alcoholic beverages compared to non-smoking households. In addition to food expenditures, the cost of smoking also reduces expenditures on clothing and education, and this effect is strongest in low-income households. Lower costs for food, clothing and education also have a long-term effect on the health and development of children in these households. The importance of reducing the affordability of cigarettes would have positive effects in the long run, because by discouraging young people from initiating smoking, it would have positive effects on society in the coming decades. In addition, non-financial measures to combat smoking need to be strengthened, such as banning smoking in cafes and restaurants, implementing existing laws restricting tobacco advertising, smoking at work and in public places, increasing investment in smoking cessation support and putting visual health warnings.

Jelena Popović, Ministry of Finance of the Republic of Srpska

Roundatble gathered around 25 participants – representatives of the policy makers, researchers, civil society and local media. Among others, participants from the following institutions participated in the discussion: 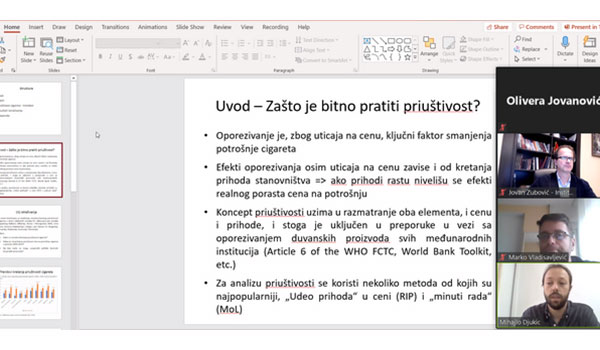 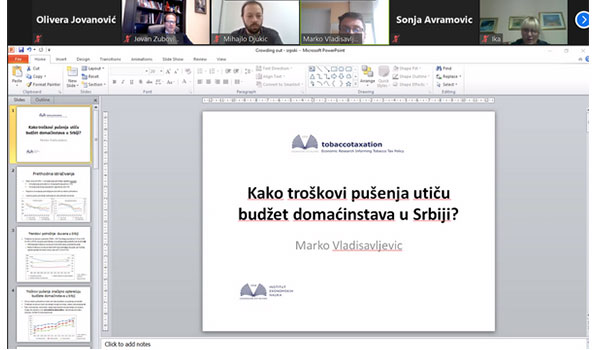