The estimated total economic burden of tobacco consumption in Bosnia and Herzegovina in 2019 is between 719 – 974 million BAM (around 2.36% of GDP). These are some of the research results presented at the event organized by the University of Banja Luka (UNIBL) team held on April 26, 2022 on the topic „Tobacco Control Policies in Bosnia and Herzegovina and their Effects“. The event was dedicated to the presentation of the research results from 2021 and previous years, followed by a moderated discussion.

The event was opened by an introduction and presentation on the main objectives of the “Accelerating Progress on Effective Tobacco Tax Policies in Low and Middle Income Countries” research project and its goals, provided by Violeta Vulović from University of Illinois in Chicago. The results of the University of Banja Luka research team were presented by Dragan Gligorić, research team leader, Ljubiša Mićić, researcher and Dragana Preradović Kulovac, researcher. The research results on the economic costs of smoking in Bosnia and Herzegovina based on the data available for 2019 show that the direct costs of smoking are between 557 – 766 million BAM. The indirect costs of smoking cover the indirect morbidity costs valued between 51 – 67 million BAM and indirect mortality costs of smoking valued between 111 – 141 million BAM. Research team leader, Dragan Gligorić emphasized that the percentage of the GDP that is lost due to the economic costs of smoking in B&H could be saved by improvement of the tobacco control policies' implementation in the country.

Finally, the University of Banja Luka team invited the Dean of the Faculty of Medicine at the UNIBL, prof. Ranko Škrbić as guest presenter. He presented the results of the research conducted by a research team he was a member of, focusing on the smoking prevalence among students at the UNIBL. He emphasized that there is a high smoking prevalence among the 1200 students surveyed in their study amounts to 34.1 percent. Prof. Škrbić pointed out that there is a high need for adoption of the proper tobacco control policies and law that would ban smoking in order to decrease the use of tobacco products, especially having in mind that smoking presents one of the major causes of cardiovascular diseases.

Presentations were followed by a moderated discussion during which the participants expressed that the research results presented at the event are quite important for policy advice. Furthermore, the participants emphasized that there is a need for a more coordinated approach towards consistent and effective tobacco control policies and their implementation that would engage all stakeholders. 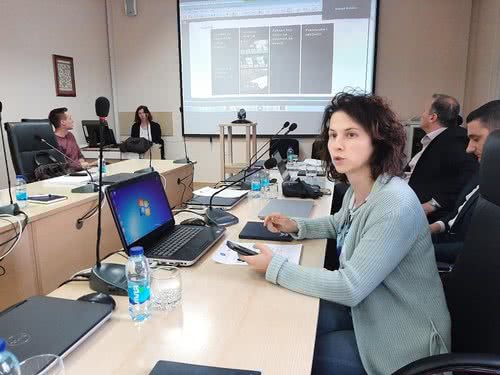