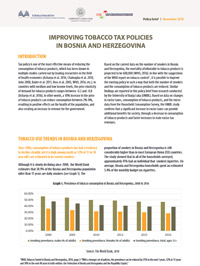 In countries with medium and low income levels, the price elasticity of demand for tobacco products ranges between -0.2 and -0.8 (Acharya et al. 2016). In other words, a 10% increase in the price of tobacco products can reduce consumption between 2%-8%, resulting in positive eﬀects on the health of the population, and also creating an increase in revenue for the government.

Based on the current data on the number of smokers in Bosnia and Herzegovina, the mortality attributable to tobacco products is projected to be 600,000 (WHO, 2016). In line with the suggestions of the WHO report on tobacco control1 , it is possible to improve the existing policy in such a way that both the number of smokers and the consumption of tobacco products are reduced.